Welcome back to Capitol Chatter: A Quarterly Analysis Of Congressional Tweets, where we help you keep track of what Congress is tweeting.

In the second quarter of 2022, Congressional Twitter accounts posted 131,311 tweets—a 3% decrease from the first quarter. Discussion of social issues rose 175% from Q1, driven by an increase in tweets containing terms related to abortion and gun issues. Meanwhile, foreign affairs and defense remained the most tweeted about topic despite a 32% decrease from Q1 to Q2, as the Russian invasion of Ukraine continued to be a focal point of conversation. 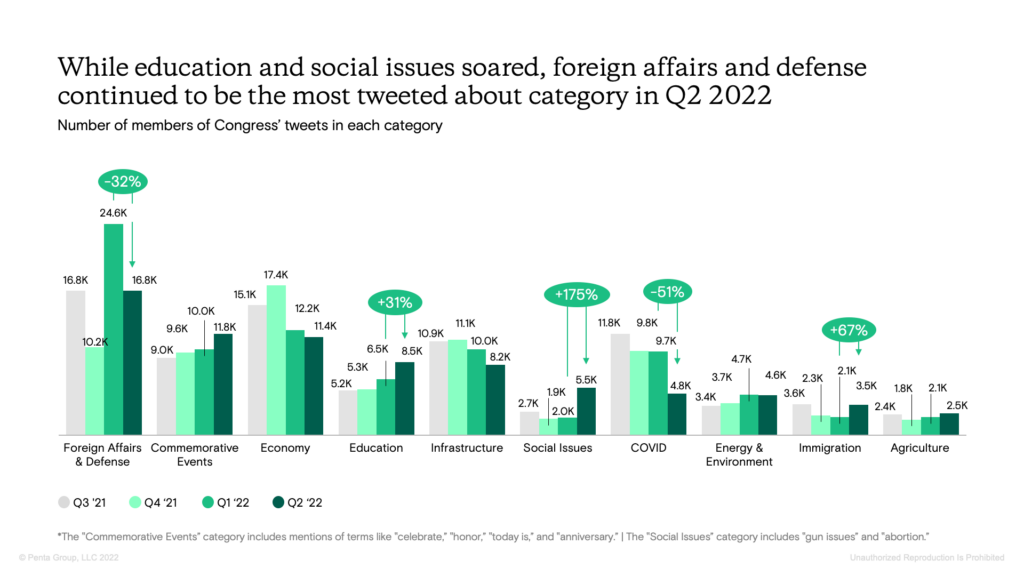 As the midterms approach, differences between Republicans’ and Democrats’ tweets about the economy indicate how each party is approaching its messaging—and its stance on the question of whether or not the U.S. is currently in a recession. Republicans continue to highlight concerns about the economy, mentioning “inflation” and “recession” more than six times as often as their Democrat counterparts. Meanwhile, Democrats focused on “jobs” and “unemployment”—two metrics that paint a rosier picture—mentioning the terms nearly 4 times as frequently as their Republican counterparts. 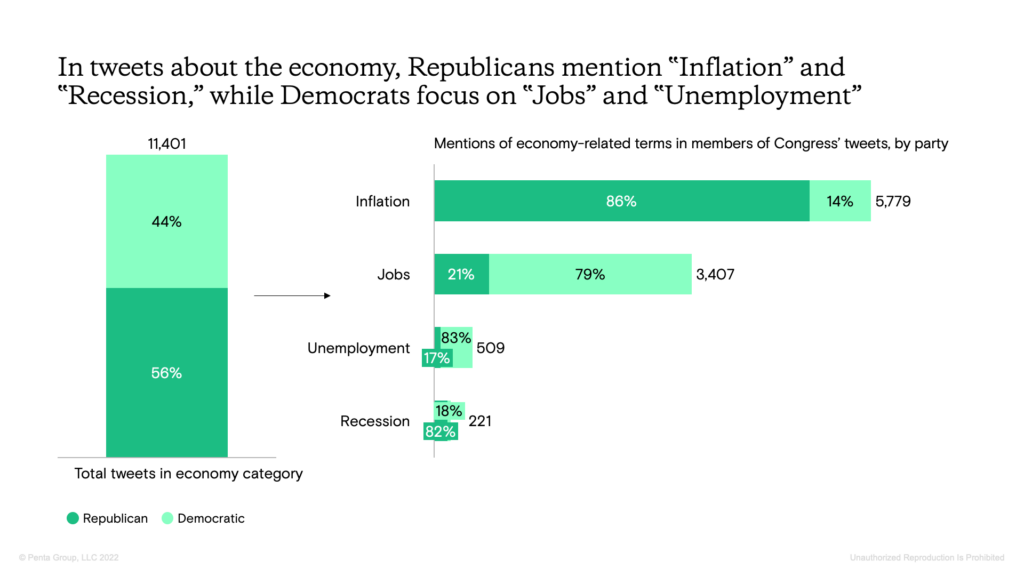 As the economic ripple effects of COVID-19 continue to put a strain on global supply chains, the U.S. was hit with shortages in consumer goods in Q2, exacerbating inflation concerns. An unprecedented baby formula shortage drove not just headlines, but Congressional activity both online and on Capitol Hill: members went from tweeting about goods shortages a few times a day to tweeting about shortages more than 100 times a day at the topic’s peak popularity as they called for a solution, resulting in the passage of the Access to Baby Formula Act.

Meanwhile, shortages of other goods, including food, cars, and gas, received much less attention. At the beginning of 2022, labor shortages were more discussed on Twitter than goods scarcity, but in Q2 both took a back seat to baby formula. 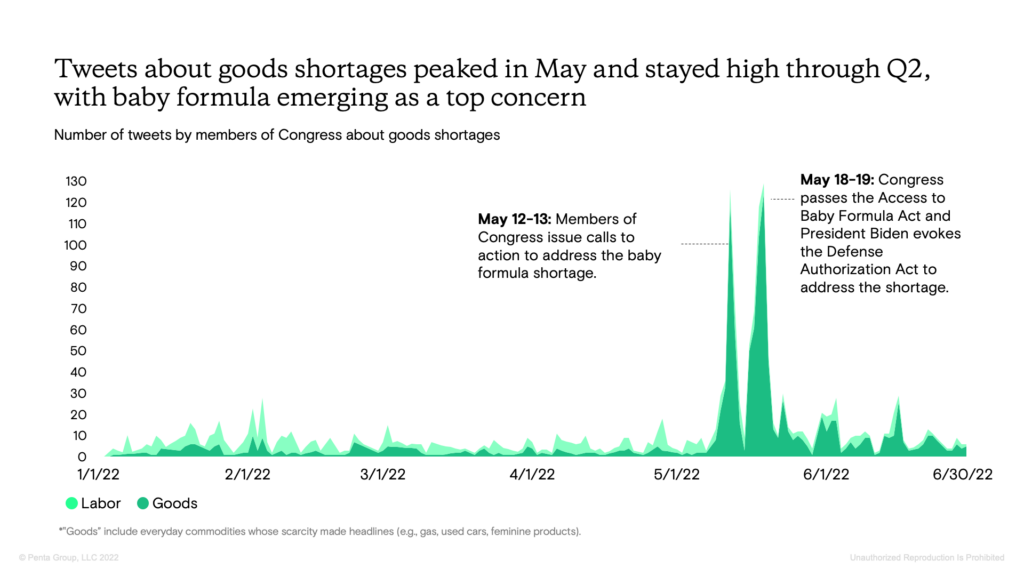 In addition to supply chain constraints and accompanying increases in consumer prices, this summer was also marked by turbulence in the cryptocurrency market following the collapse of the Terra and Luna coins. The collapse helped spark Congressional Twitter discussion of cryptocurrencies as the industry lost $2 trillion in value following years of explosive growth.

Both parties focused on the broader industry rather than specific cryptocurrencies: the world’s largest currency, Bitcoin, was only mentioned 36 times, while Ethereum was not mentioned at all.

However, Republican and Democrat members of Congress discussed the industry differently; Republicans were often more favorable to crypto, focusing on its benefits of “digital assets” and emphasizing the need to ensure regulation does not jeopardize the U.S.’ leadership position in the industry.

Meanwhile, Democrats called for regulation that mitigates the volatility often associated with Crypto, citing the collapse of Terra and the broader bear market that followed.

There was some bipartisan support for the industry, as Sen. Kirsten Gillibrand (D-NY) and Sen.  Cynthia Lummis (R-WY) introduced the Responsible Financial Innovation Act, which would create a regulatory framework for cryptocurrency and digital assets. 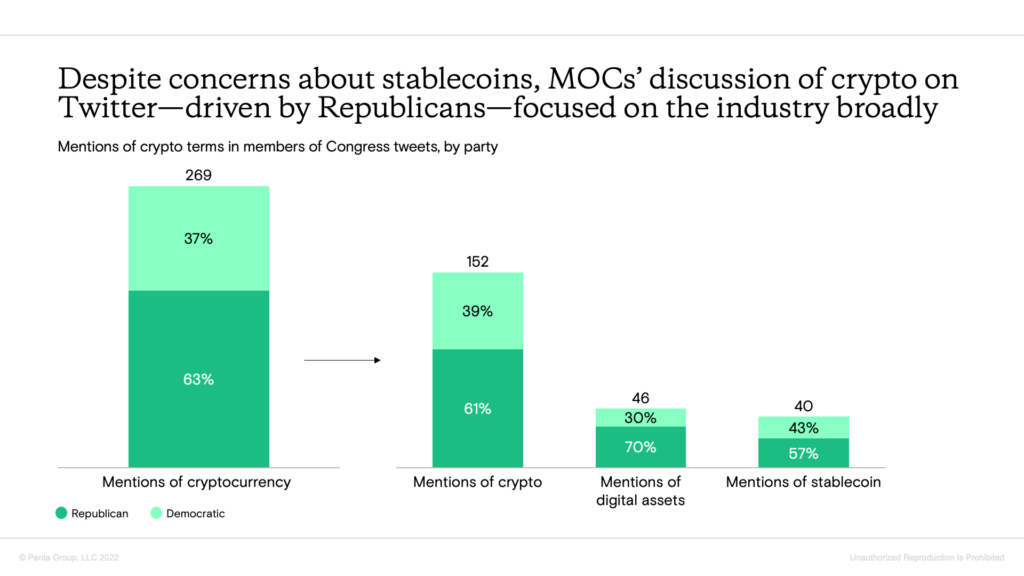 Penta conducted text analysis on tweets and retweets from members of Congress and Congressional committee accounts that were posted between April 1, 2022 and June 30, 2022. In total, we searched for more than 150 keywords in each of the 131,311 tweets to determine which topics were discussed in each. In this analysis, independent Senators Bernie Sanders (I-Vt.) and Angus King (I-Maine), who caucus with the Democratic Party, were treated as Democrats. Charts and numbers may vary slightly from quarter to quarter given methodology adjustments.

For the shortage chart, Penta identified members of Congress tweets that discussed supply chain breakdowns, shortages, or scarcities, and searched for mentions of labor, workforce, and various consumer goods.

Get in touch to learn more about our products, services, & solutions.